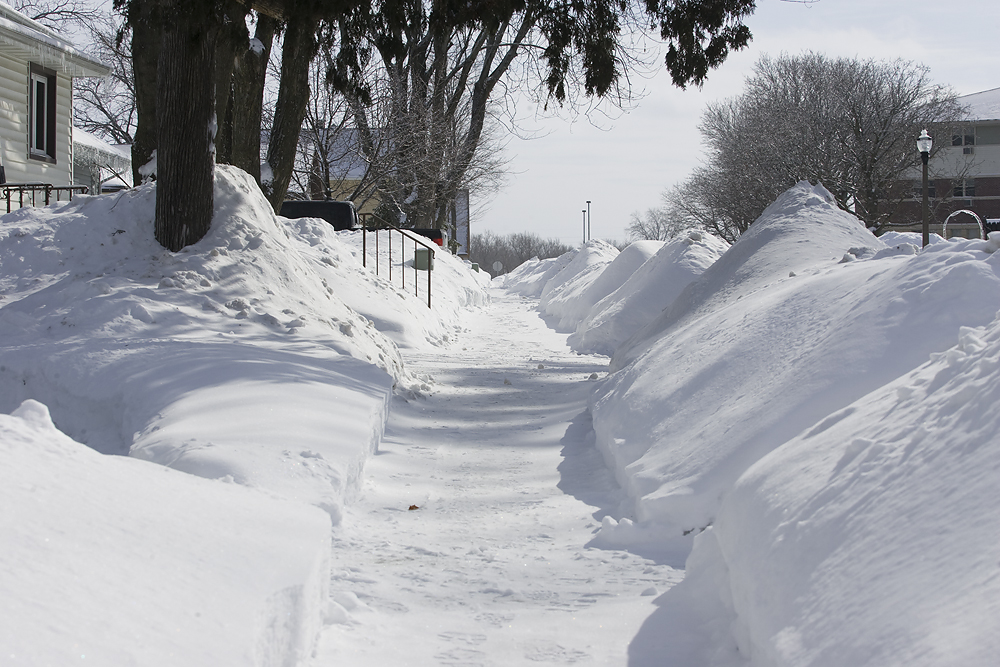 Snow-covered and slippery sidewalks and driveways aren’t the only headaches we face each winter. Unfortunately, many homeowners learn too late about the damage ice dams, bursting pipes, and heavy snow on the roof can cause to ceilings, walls, floors, and furniture! Fortunately, you can avoid the aggravation and expense by taking several basic steps right now to prevent this kind of damage.

An ice dam is an accumulation of ice at the lower edge of a sloped roof, usually at the gutter. When interior heat melts the snow on th eroof, the water will run down and refreeze a the roof’s edge where temperatures are much cooler. Eventually the ice builds up and blocks water from draining off of the roof. This, in turn, forces the water under the roof covering and into your attic or down the inside walls of your home.

Once an ice dam forms, the potential damage can be serious. Take these steps now to avoid trouble later:

This two -step approach decreases the likelihood that ice dams will form or, at least, reduces their size.

Unfortunately, ice dams may be unavoidable if your home has recessed lighting near the roof. Heat generated from these lights melts snow, which then contributes to ice dam build-up. The only sure way to avoid this problem is to eliminate recessed light fixtures near the roof.

If you re-roof your house, installing a water repellent membrane under the roof covering is an extra precaution you can take to prevent roof leaks caused by ice dams. Talk to your local building official about minimum code requirements for ice dam protection.

Frozen water in pipes can cause water pressure build-up between the ice blockage and the closed faucet at the end of a pipe. This leads to a pipe bursting at its weakest point. Pipes in attics, crawl spaces, and outside walls are particularly vulnerable to freezing in extremely cold weather. Holes for television, cable, or telephone lines in your home’s outside walls, allow cold air to reach them.

To keep water in pipes from freezing:

Fit exposed pipes with insulation sleeves or wrapping to slow the heat transfer. The more insulation the better.

Snow can Overload a Roof

A roof can collapse under the weight of a heavy snowfall. The age of the building is a major factor in the snow load risk. Light metal buildings typically have less capacity to handle a heavy snow load. On a flat roof, the step-down area between roof sections is a potential source of overload because of the tendency for ice and snow collection.

The best source for determining how much snow load a building can handle is the design plan. Most roof designs can handle at least 20 pounds per square foot. For safe removal that won’t endanger you or damage your roof, consult a roofing contractor.

Follow these guidelines to help estimate the weight of snow on a roof:

Fresh snow: Ten to twelve inches of new snow is equal to one inch of water, or about five pounds per square foot of roof space. Anything more than four feet of new snow can put the roof at risk.

Packed snow: Three to five inches of old snow is equal to one inch of water, or about five pounds per square foot of roof space. Anything more than two feet of old snow could be dangerous.

Fresh and packed snow: The combined weight of two feet of old snow and two feet of new snow could be as high as 60 pounds per square foot of roof space. This will test the limits of even the best-designed roof.

Ice: One inch of ice equals about a foot of fresh snow, so keep this added weight in mind when calculating how much a roof design can handle.

All of the thawing and re-freezing ahead can potentially cause problems for homeowners, but can be eliminated or reduced by taking a few steps to prevent that from happening.
*Source: West Bend Mutual “Avoid Winter Perils”