One of the first in the doors, John Tomlinson, Vice President of Employee Benefits,  had a great view of President Obama’s congratulatory speech. The president was in town as a result of Milwaukee winning the Healthy Communities Challenge brought about by www.heatlhcare.gov. 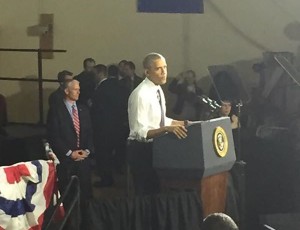 The President was introduced by a young man that told a story about how he was uninsurable because of a rare auto immune system disease and until Obamacare came about he couldn’t get insurance. While the story was uplifting, being a knowledgable agent, John knew the statement was not accurate – before Obamacare the State of Wisconsin had something called HIRSP which was a guaranteed issue plan through the State for those that could not get Health Insurance.

President Obama came on after the young man and congratulated Abele, Barrett, the Community Enrollment Teams and Independent Agents that helped enroll a record amount of people into Obamacare.

“He was very charismatic and it was a great speech, but me being an agent, I found some of it to be more rosy than the actual situation is,” said John Tomlinson.

To see more from the event visit: http://fox6now.com